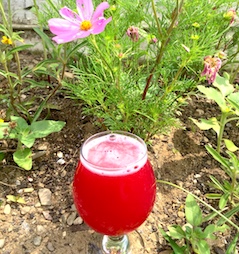 Just Beet Wit is our fuschia-colored, easy drinking Belgian-Style White ale that has a balanced, earthy sweetness from the local, heirloom beets. As is required with White Ales or Wits, ours is brewed with coriander, chamomile, and orange peel. We then added the forono beets to the secondary, making this refreshing beer as tasty as it is pretty!

For those of you wondering about this beer’s backstory, we first made a tiny test batch as a “one-off” for a VIP reception at the Passport event at Strawbery Banke. We were pretty happy with the results and with people’s favorable reactions, so we decided to ‘go for it’ and make a full sized batch. Fast forward several years, and this beer is one of our most commonly asked for beers from some of our most loyal customers. We try and make Just Beet Wit at least once a year, once the beets are ready.