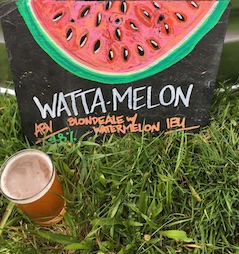 Availability Summer
ABV 4.9
IBU 18
Style Blonde Ale with Watermelon
Flavor Profile Fruity & Spicy
Pairing Pair this with roasted chicken, salads, aged gouda, ceviche, and grilled fish. We also like it on its own – best drank outside!
Usually Available In

On Tap at Hobbs Farm

Watta Melon Blonde is the epitome of Summer & picnics – made with ripe watermelon from Wake Robin Farm (in Stratham, NH) – this beer is super refreshing and highly drinkable, with just a touch of watermelon sweetness. We brew this beer once a year to be released around the fourth of July, which also coincides with Throwback Brewery’s yearly anniversary. But don’t wait too long to come and try this beer, it is a fan favorite, and never lasts until August!