Be Still My Beeting Heart Stout 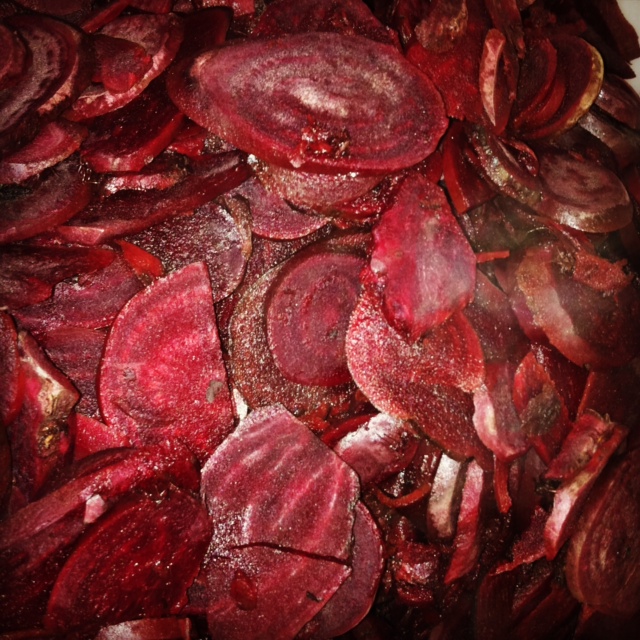 If you are reading this post and are a regular follower of our comings & goings, you’ve probably already ascertained two things:
1: The next beer in the Unafraid of the Dark II series is, indeed, a stout made with beets!
2: We have not lost our fondness for bad puns, as you can tell by the name of this beer – “Be Still My Beeting Heart Stout”! 🙂
The inspiration for this beer came from a casual conversation with Josh from Meadow’s Mirth Farm (Stratham, NH), who suggested that his big & beautiful beets would make for an interesting beer.  We agreed, and decided to time the arrival of this romantic, red-hued stout to occur right before and during valentine’s day!

Before jumping in to describe the beer and how we made it, first, a few words on the oft-maligned veggie. We realize that within our customer base, there are a large number of beet-fanatics (ourselves included!)  But, we also know that some of you are more akin to beet-skeptics, or even beet haters.  Perhaps you had beets from a can as a child, and the metallic flavor turned you off (as it should!)?  Maybe you ate a few too many beets one day and freaked out during a trip to the loo 😉 ?  Or, perhaps you aren’t too fond of the taste?  Whatever the reason, we hope that our beer gives you a reason to give beets another chance!

Alright, enough beet lobbying – on to the beer!

We started with 30 pounds of beets from Meadow’s Mirth, which we washed, sliced, and then put in hot water to soften a bit. 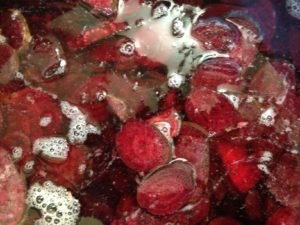 Once the beets were softened, we put them into the mash.  Our goal was to extract some flavor, color, and sugar from the beets during this step of the brewing process. 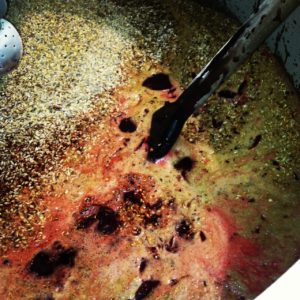 The wort extracted from the mash tun was a beautiful red color, but this color all but disappeared during the boil.  So, after the primary fermentation, we decided that we wanted to ‘bring the red back’, which we accomplished by an addition of 10lbs of roasted and pureed beets (also from Meadow’s Mirth.)  The extra beets did the trick!  While the beer is a pretty dark stout, it has this amazing purplish almost maroon color to it.  Before carbonating, Annette also added in some Cocoa Nibs to round out the beer and give it a nice, subtle undercurrent of chocolate.
The result?  A very fun beer that makes a perfect Valentine’s Day / mid-Winter treat!

The tasting details::
– A slightly earthy / chocolate / beet-y nose.
– The beer is very smooth drinking.  Take a sip, and you should pick up both the roastiness from the malt and the earthiness from the beets.  The beet flavor is prominent, and it lingers on the back of the palette.
– The head is this very pretty pink color.  In fact, I challenged Annette to have this beer come out with a red / pink head, and she and the team delivered!
– 5.2% Alcohol by Volume.  44 IBU. 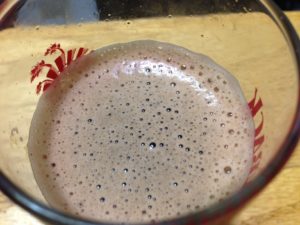 Beet-tastic Head on this Beer!

We are excited for you guys to try this beer!
Cheers!
–Nicole