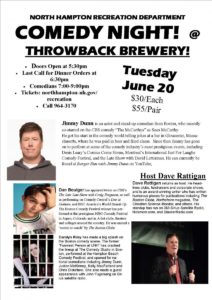 oin us for some drafts & laughs in support of the North Hampton Recreation Department at a Comedy Night Fundraiser here at the brewery. Come out Tuesday, June 20th for a great cause – this year’s headliner is Jimmy Dunn! Last year’s event sold out – so get your tickets today! $30/pp or $55/2pp.
Comedy starts at 7:30pm, but we are opening the doors two hours earlier in case anyone wants to stop by for dinner or beers before the show! (Note: we are offering a smaller, special menu that night. Dinner is not included in the ticket price.)
5:30pm Doors open
6:30pm Last call for dinner orders
7-9pm Comedians perform:
Host Dave Rattigan, Comedians Dan Boulger & Carolyn Riley, Headliner Jimmy Dunn.
A bit about the headliner: Jimmy Dunn is an actor and stand-up comedian from Boston, who recently co-starred on the CBS comedy “The McCarthys” as Sean McCarthy. He got his start in the comedy world telling jokes at a bar in Gloucester, Massachusetts, where he was paid in beer and fried clams. Since then, Jimmy has gone on to perform at some of the comedy industry’s most prestigious events, including Denis Leary’s Comics Come Home, Montreal’s International Just For Laughs Comedy Festival, and the Late Show with David Letterman.
You can view the rec department’s full sized version of the flyer here.
Call 964-8087 for tix, click here, or visit the North Hampton town website.