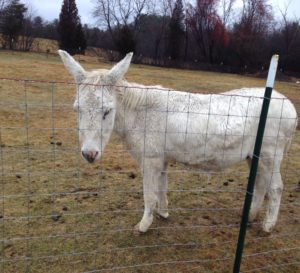 A soggy, but happy donkey!

One fine Saturday morning in May a few years back, we were reading the local paper and found this little gem in it (in the police log section):
Friday, May 24. 8 p.m.: Police received a report of a donkey being left outside in the rain on Elm Road. Police checked the area and could not locate any animal left outside.

This tiny writeup made us laugh out loud for a few reasons:
1- There are maybe five houses on Elm road, only one with a donkey, so we – at Hobbs Farm – were obviously the culprits!
2- Donkeys are pretty darn smart. Jericho, the donkey at Hobb’s Farm, was especially smart… and quirky. He did what he wanted, when he wanted. And, since the door to his barn was always left open, on that fine day in May he probably decided that he wanted to frolic a bit in the Spring rain. By the time the police arrived, he had let himself inside. I kind of imagine Jericho chuckling to himself as the cops looked to see if he was ok. 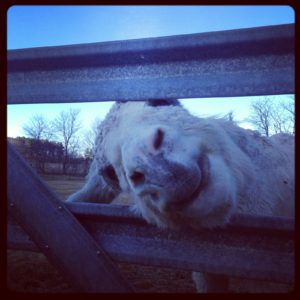 We thought this story was pretty funny, so we relayed it to our friend Charlie Ireland, one of the brewers at Smuttynose. Charlie thought about it and responded that we should make a Brett beer and name it Soggy Donkey. (side note- For those of you not familiar with the term Brett, it is the short name used for a type of yeast called Brettanomyces. Brett gives beers a certain ‘funky’ quality to them, which some often describe as “barnyard”… hence Soggy Donkey.)

Fast forward a few years- and Evan Mallet from the Black Trumpet asked us to collaborate with another brewery on a beer for their beer dinner. The discussion on who we should brew with and what we should brew didn’t take more than a few seconds– the obvious choice — Charlie (who is now the head brewer at Smuttlabs) & Soggy Donkey.

Ok, enough back story, let’s get to the beer! We decided to make a White IPA (since Jericho was a white donkey.) A White IPA is basically a wit or white beer (made with wheat, orange peel, coriander, and chamomile), but hopped like an IPA. For hops, we used Cascade and Citra in the boil & flame out, and Cascade, Amarillo, and Citra for dry hopping. To get a nice full body, we also added some oats to the mash. Finally, Charlie has a very nice ‘house’ strain of Brett yeast that he uses in his Brett beers that was used during the primary fermentation.  We finished fermentation by adding a touch of saison yeast, which developed into some nice peppery complexities in Soggy Donkey.

The result? A beer with big orange and citrus on the palate, but with the nice bitter kick of an IPA, followed with a touch of funk from the Brett. The nose on this beer is great – orange and lemon peel, with a bit of an earthy Brett essence. Soggy Donkey is pretty dry, but still juicy, with a full body. We think drinking this beer a little bit warmer than a typical IPA brings out more of the subtle flavors. We put it on tap for the first time today, and it quickly became the top seller.
So come on by and give Soggy Donkey a try! 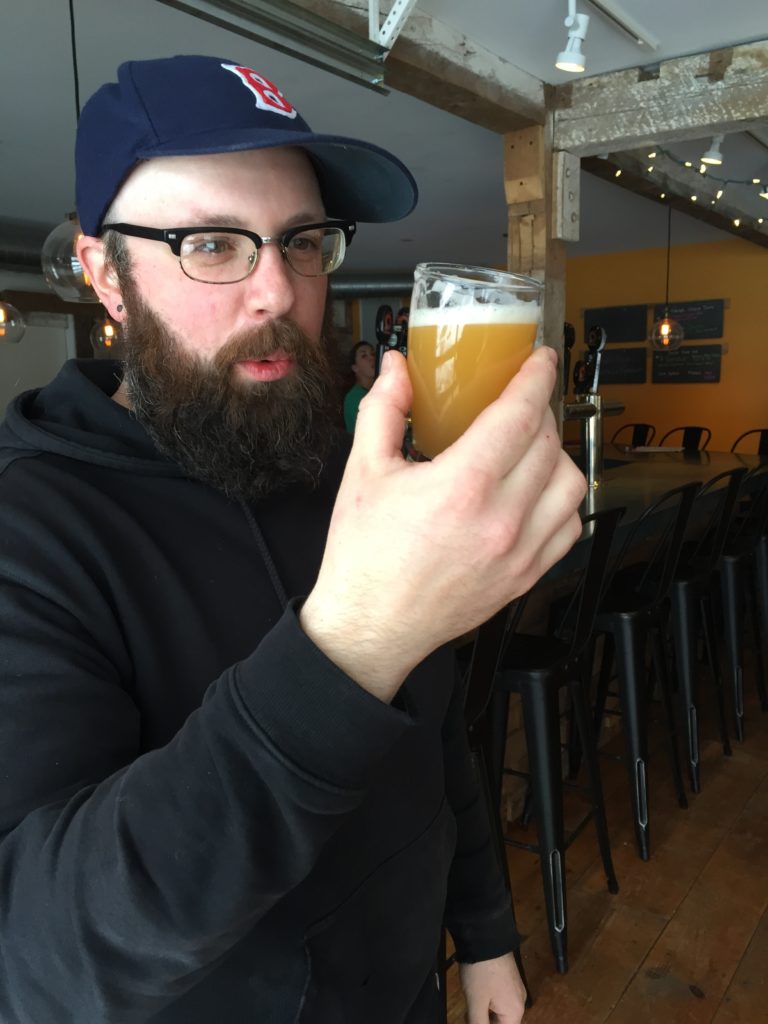