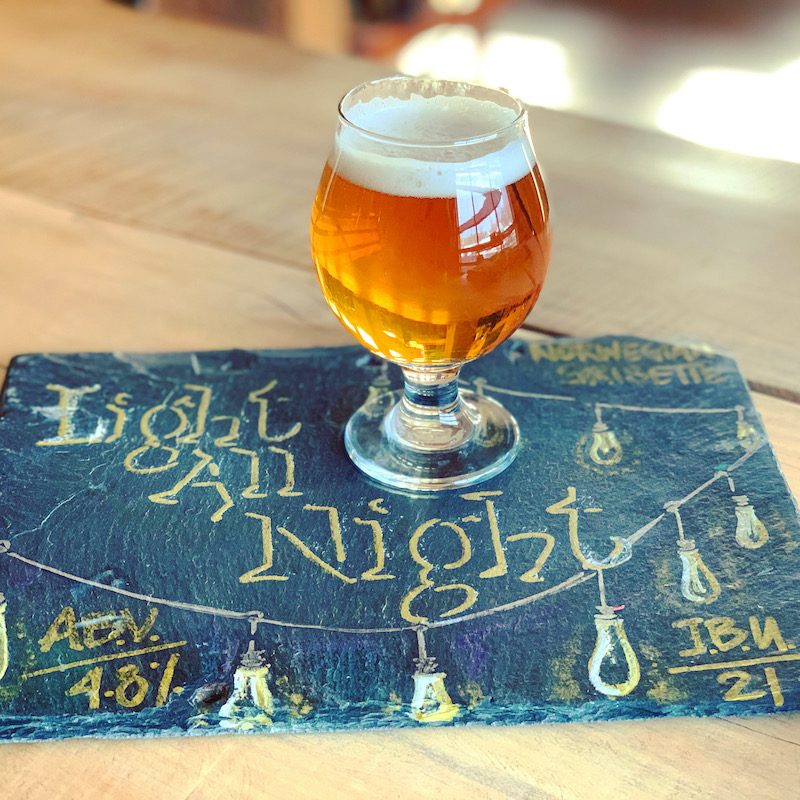 Light All Night is a gold-colored, quaffable farmhouse-style beer featuring a fruity, lemony citrus nose, a crisp & effervescent mouthfeel, and light flavors of orange & lemon, ending with a touch of black pepper spice from the yeast.

We first brewed Light All Night, our Norwegian Grisette, as a “one off” or experimental beer for the 2017 NH Brewers Festival. Given how many people loved this beer, we’ve decided to brew it again!

For those of you wondering what a grisette is, check out the following from Draft magazine. In this article, they note that brewers typically describe grisettes as having the following elements “low-ABV, saison-like, brewed with wheat, farmhouse, Belgian/French, and some bit of lore involving miners and women in grey dresses. ” Now, what is that lore? According to the Draft article, “1. Grisettes were originally brewed for miners in Belgium’s Hainaut province. According to the book “Farmhouse Ales” by Phil Markowski, and to the brewers I spoke to, as the Hainaut region began to shift from farming to industry (primarily coal and stone mining), its beers changed as well. “Grisettes were for miners, and saisons were for your seasonal workers,” says Side Project brewer Cory King, who brews a grisette as well as many subtypes of saisons. Some say the term grisette refers to the “grey” color of the beer (gris is “grey” in French) due to its long boiling time and percentage of wheat in the grain bill; others say it refers to the grey pinafores worn by the women who would serve the beer to returning miners. But I like Yvan De Baets’ explanation for its vivid imagery: “The beer was made in a region with a lot of stone quarries, and it would quench the thirst of those workers, who came back from work covered with grey dust.””

Pretty neat history for a pretty neat style of beer!