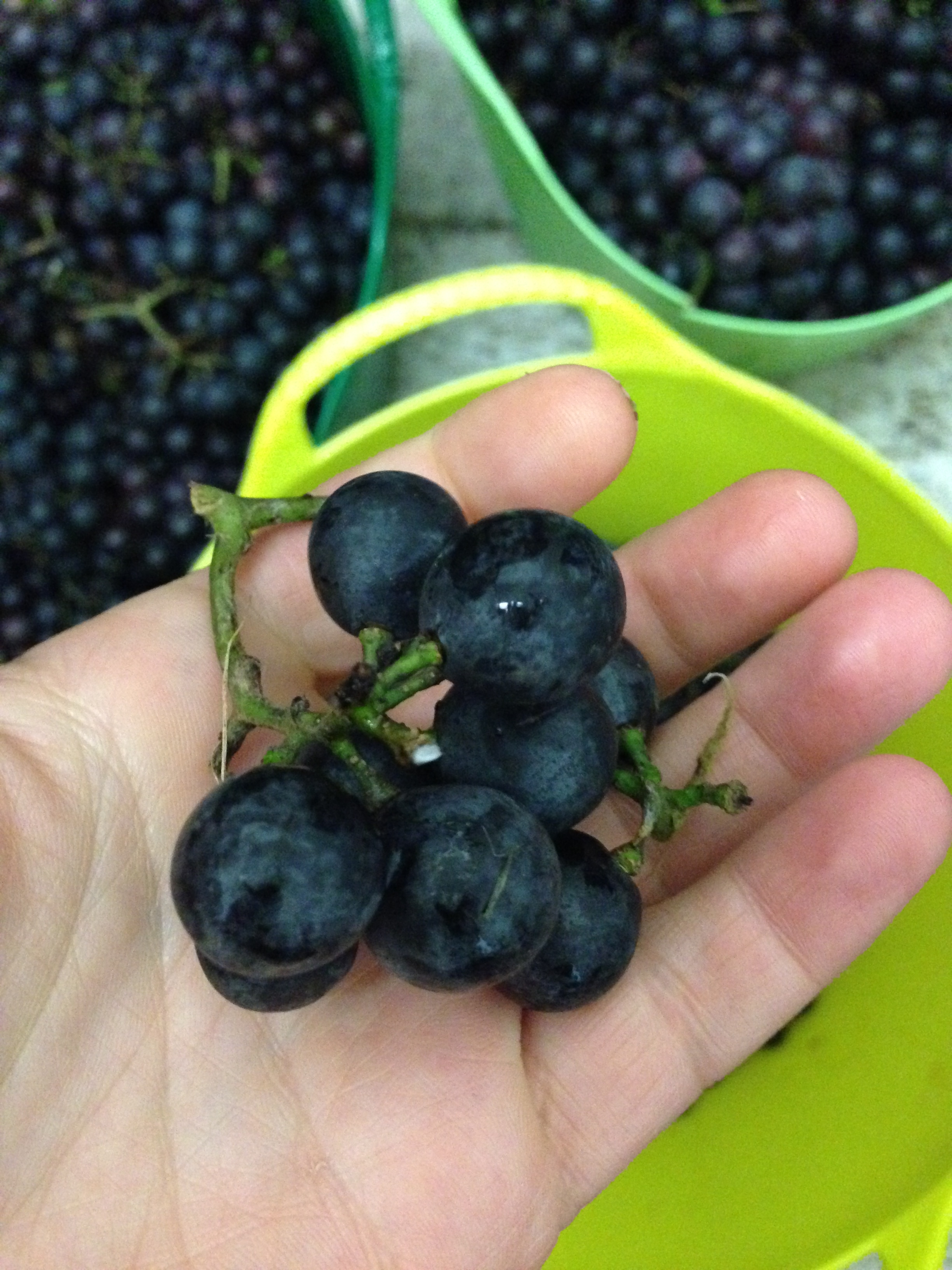 This past September, our friends Mimi and Steve called us up and said, “our arbor fell while we were on vacation. Do you want to come over and pick grapes?’. We tried to balance the right tone of empathy ‘oh – sorry to hear about your arbor’ with our utter glee… ‘Oh yes– free, local grapes! We always wanted to brew with grapes!’.

Truth be told, we had been eyeing Mimi and Steve’s grape vines for years. So plump. So juicy. So tart. So many! So… brew-able! The downfall of the arbor seemed to indicate it was finally time to make a grape brew.

I suggested we make a Stout, but Annette had a better idea – “what about a Berliner Weisse?”. I was intrigued. For those of you not familiar with this style of beer, a Berliner Weisse is a tart, light bodied, low alcohol (usually ~3 percent) wheat-based beer. The tartness can come from the introduction of Lactobacillus during fermentation. Or, you can sour the beer (in the mash or the kettle). In Germany, you will find that it is common to add flavored syrups to the beer (woodruff, kriek / cherry, raspberry, etc.) to counter-balance the sourness.

So how did we make our Berliner Weisse? First, as mentioned above, we gathered up about 40 pounds of grapes from Rye, NH. 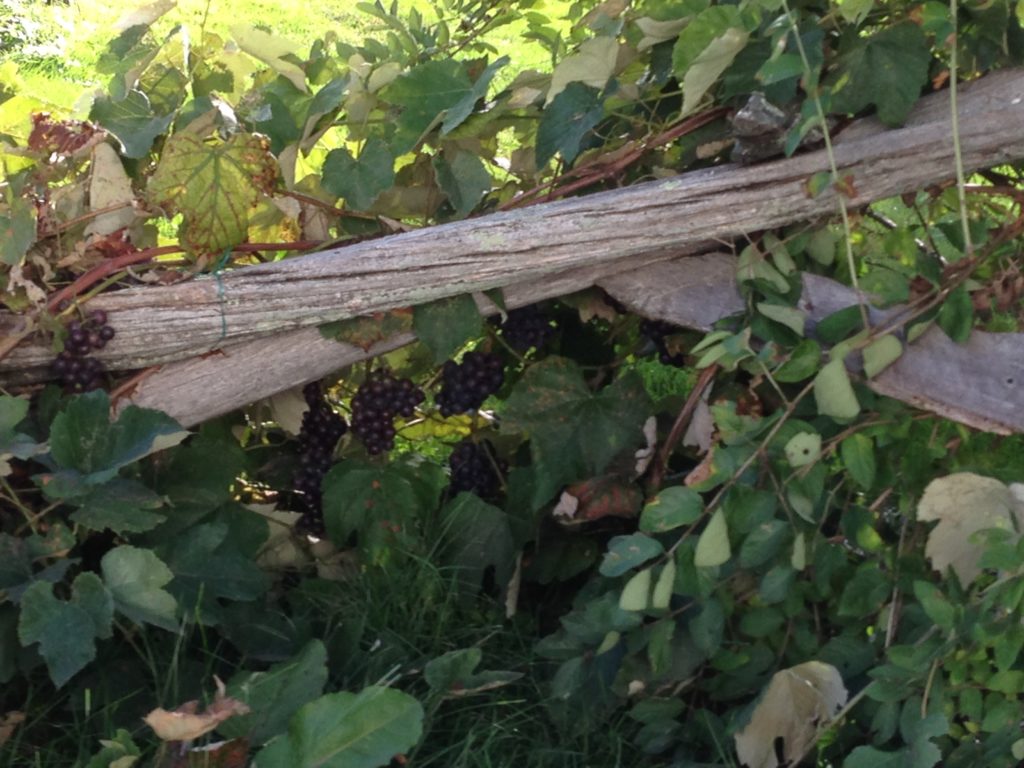 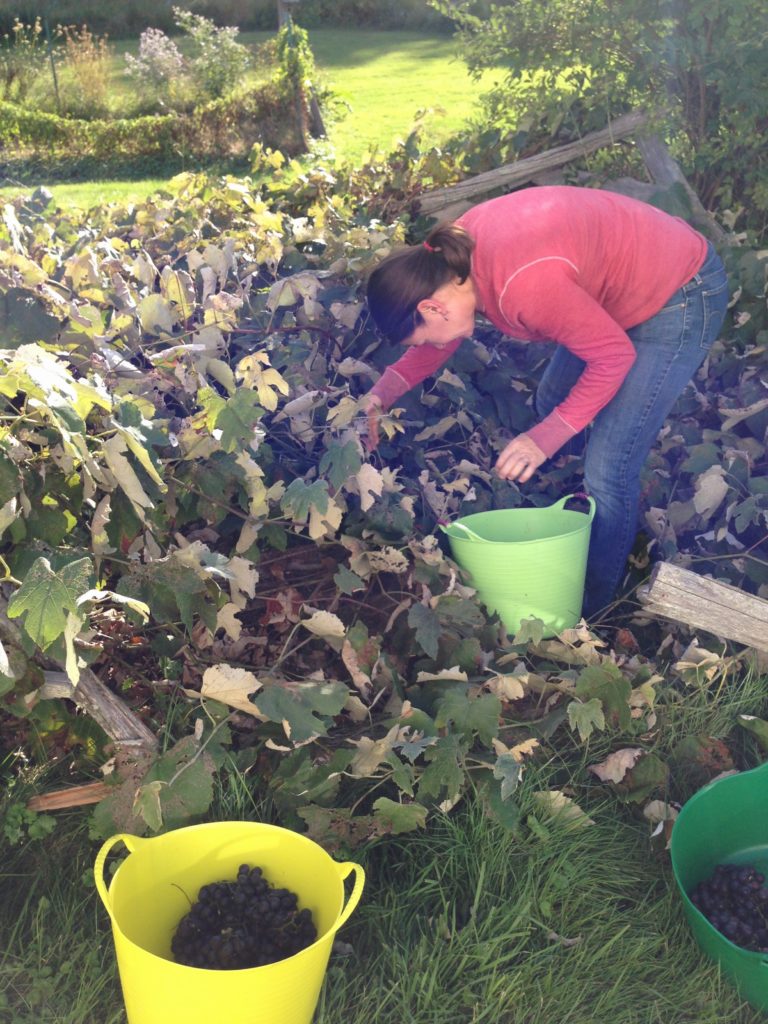 Next, we started to brew as we normally would. We crushed the grain (Note – A ‘traditional’ Berliner Weisse is often straw-colored. We, however, decided to add some chocolate malt to give the beer a bit of roastiness and a nice dark hue.) We mashed in. We made the wort. Then, rather than start the boil right away, we let the wort sit in the kettle overnight.

The next day, we started measuring the pH. In a nutshell, we were waiting til the wort naturally started souring. 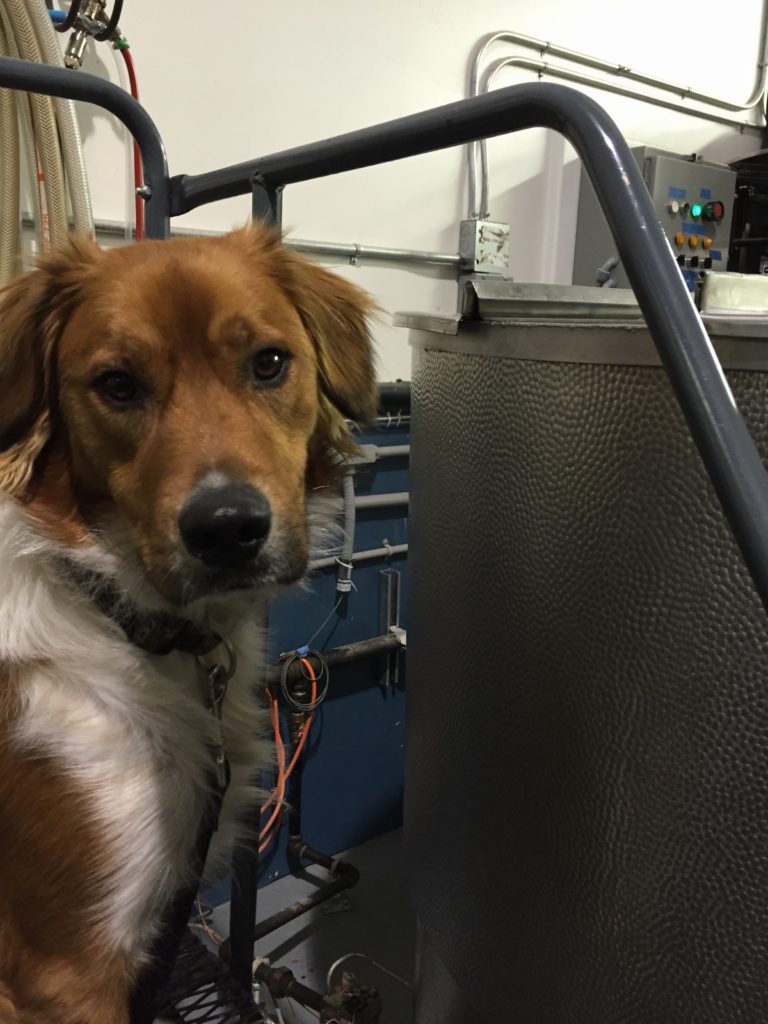 Barry patiently waiting for the beer to sour

Once we hit the desired pH, we started the boil. At the end of the boil, we steeped about 24 pounds of the Concord grapes in the wort. We also added a couple quarts of the grape juice (made from these grapes) during secondary.

Here’s what you can expect when you try the beer.
– Appearance: Hold the beer up to the light and it is a beautiful mahogany brown, with purple red undertones. 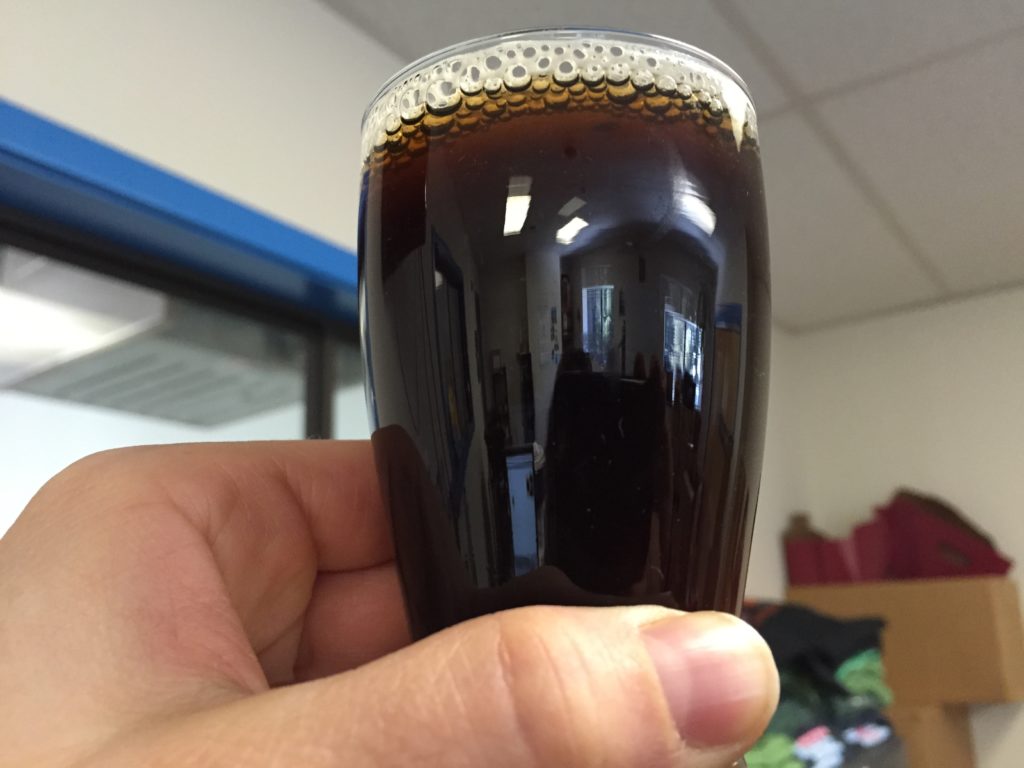 – Aroma: It really smells like grapes! If you closed your eyes and took a big sniff, you probably couldn’t tell that you were about to drink a beer… there is no discernible hop aroma – just a very pleasant, sweet, fruity grapeness.
– Taste & Mouthfeel: As per style, this beer is very light in body. Carbonation is almost effervescent. Swirl the beer around your mouth, and you will feel the sour – especially along the sides of your tongue. The roastiness from the malt comes through- which is a nice counter-balance to the sweet / sour grapes. The taste is almost more like grape skin than grapes. We think it is super refreshing to drink, and a perfect beer to bring us into Springtime.
– Pairing: I’d love to tuck into a huge plate of traditional German Sauerbraten while drinking this beer. We recommend also pairing it with a light, crisp salad, cheeses (we tried Cheddar), and dark chocolate.
– Stats – ABV is 3.8% and IBU is 4.6

The Grape Beyond will be available starting Thursday, March 19th.