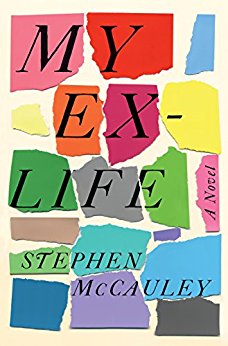 Hello book club friends! Our next meeting will be Sunday, August 12th at 1pm to discuss My Ex-Life by Stephen McCauley. Here’s what Amazon has to say about this book:

“I didn’t know how much I needed a laugh until I began reading Stephen McCauley’s new novel, My Ex-Life. This is the kind of witty, sparkling, sharp novel for which the verb ‘chortle’ was invented.” —Maureen Corrigan, Fresh Air

“McCauley fits neatly alongside Tom Perrotta and Maria Semple in the category of ‘Novelists You’d Most Like to Drive Across the Country With.’” —The New York Times Book Review

David Hedges’s life is coming apart at the seams. His job helping San Francisco rich kids get into the colleges of their (parents’) choice is exasperating; his younger boyfriend has left him; and the beloved carriage house he rents is being sold. His solace is a Thai takeout joint that delivers 24/7.

The last person he expects to hear from is Julie Fiske. It’s been decades since they’ve spoken, and he’s relieved to hear she’s recovered from her brief, misguided first marriage. To him.

Julie definitely doesn’t have a problem with marijuana (she’s given it up completely, so it doesn’t matter if she gets stoned almost daily) and the Airbnb she’s running out of her seaside house north of Boston is neither shabby nor illegal. And she has two whole months to come up with the money to buy said house from her second husband before their divorce is finalized. She’d just like David’s help organizing college plans for her 17-year-old daughter.

That would be Mandy. To quote Barry Manilow, Oh Mandy. While she knows she’s smarter than most of the kids in her school, she can’t figure out why she’s making so many incredibly dumb and increasingly dangerous choices?

When David flies east, they find themselves living under the same roof (one David needs to repair). David and Julie pick up exactly where they left off thirty years ago—they’re still best friends who can finish each other’s sentences. But there’s one broken bit between them that no amount of home renovations will fix.

In prose filled with hilarious and heartbreakingly accurate one-liners, Stephen McCauley has written a novel that examines how we define home, family, and love. Be prepared to laugh, shed a few tears, and have thoughts of your own ex-life triggered. (Throw pillows optional.)