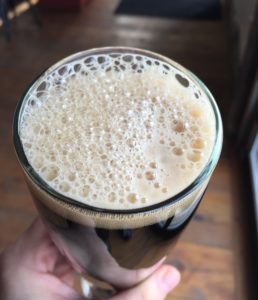 One of my favorite things about this year’s Unafraid of the Dark V series is how each beer is so unique and so different from each other. The first beer we unveiled – our Plum Porter – is a big, robust, full-bodied beer with rich port-like notes. This week we go the other direction, with a beer that we think is equally as fun and delicious, but is quite light bodied, low in alcohol, and very, very crushable. The beer? It’s our take on a Black Forest Cake, and here is the story of how this beer was born…

Every October for the past five years, we have brewed Fat Alberta – our Chocolate Peanut Butter Imperial Stout. Fat Alberta is a huge beer- 10% alcohol. To brew a beer that big, we need to stuff the mash tun with grain so that we can extract as much sugar as possible. Once we are finished pulling out the sugar we need for Fat Alberta (a.k.a., making the wort), we end up with a good amount of sugar left in the grain. On our smaller system, we would run more water through the grains, and then give away these ‘second runnings’ to local homebrewers. Since our system is so much bigger this year, we had enough second runnings to make a small batch of a whole other beer!

This got our wheels turning… What could we do here? We knew the beer would be relatively low alcohol. We also knew that given the uniqueness of such a beer, we wanted to brew it for our Unafraid of the Dark series. Other than that, the possibilities were endless. Assistant brewer Cheryl stepped up and suggested that we lager the second runnings to make a Black Lager or Schwarzbier (note- this is the same style of beer as our Oma’s Tribute.) Given her penchant for cakes, she also suggested a black forest cake, which made complete sense to us – why not design a German-style beer to taste like a German-style cake!? 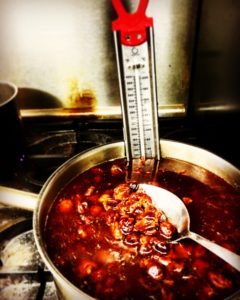 Getting the cherries ready!

Like the vast majority of beers we make, this is a very well balanced, pretty subtle beer. We added just enough dried cherries to get the aroma and a bit of cherry flavor. We soaked oak spirals in Flag Hill white rum, and added them to the secondary in order to get some vanilla oaky-ness into the flavor profile. Finally, we added cocoa nibs to give it a bit of chocolate flavor. We think we did enough to make this beer really unique and interesting to drink, but we also managed to not overdue it, so you really do want to drink more than one or two of these at a time.

The other great thing about this beer, is that it doesn’t drink like a dark beer – there isn’t a lot of roast. Why is this great? Well, we are always on a mission to get folks that think they don’t like beers to give them a whirl. There is such a diversity in how one dark beer tastes from another. Many of you might have heard me say ‘Don’t judge a beer by its color’… and this beer perfectly personifies that statement. If you have a friend that doesn’t like dark beer, have them close their eyes and give this beer a try!

Here are the tasting notes from our team on this latest beer – Black Forest Cake: 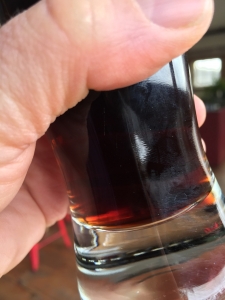 – Appearance: Light creamy colored head, beautiful chestnut colored beer with red undertones.
– Aroma: Light cherry, chocolate, and oak in the nose. Chef Carrie said it smelled fondly of ‘Autumn leaves’.
– Taste & Mouthfeel: This is definitely a light bodied beer. Subtle tart cherry notes – the cherry comes out more as the beer warms up. The are also vanilla oaky notes and light chocolate undertones. The beer finishes dry.
– Pairing: This is a delicate beer, so it shouldn’t be paired with strong foods that will overwhelm the taste of the beer. We think it would go perfectly with German food – schnitzel, spaetzle, as well as mushroom or potato pierogies, beef stew, roast beef, mild cheeses like camembert. You can also go sweet with this. I drank a pint while eating one of our spent-grain chocolate chip cookies that we make here at the pub. Let’s just say that that did not suck!
– Stats – ABV is 4.3%  and IBU is 13.
Black Forest Cake will be available starting tomorrow,