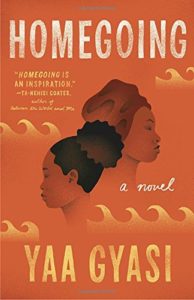 Note- this meeting was originally scheduled for the 5th, but it has been moved to the 19th!

Howdy, Throwback Book Club! Our next meeting will be on Sunday, November 19th at 1pm. The winning book from last month’s group vote is Homegoing by Yaa Gyasi – it received more than two thirds of the votes! Accolades for this book include: Winner of the PEN/Hemingway Award, Winner of the NBCC’s John Leonard Award, A New York Times Notable Book, A Washington Post Notable Book, One of the Best Books of the Year: NPR, Time, Oprah.com, Harper’s Bazaar, San Francisco Chronicle, Mother Jones, Esquire, Elle, Paste, Entertainment Weekly, the Skimm, Minneapolis Star Tribune, BuzzFeed.

From Amazon, here is what the School Library Journal has to say about this book:

“This sweeping family saga encompasses seven generations of descendants of a Fante and his captured Asante house slave. After giving birth to a daughter, Maame manages to escape, making her way alone back to her own village. She is taken in by an Asante warrior, becomes his third wife, and has a second daughter by him. The two sisters, Effia and Esi, will never meet, their lives will follow very different paths, but their descendants will share a legacy of warfare and slavery. Effia will marry an Englishman who oversees the British interest in the Gold Coast slave trade. Esi will be captured by Fante warriors, traded to the Englishmen, and shipped to America to be sold into slavery. Progressing through 300 years of Ghanaian and American history, the narrative unfolds in a series of concise portraits of each sister’s progeny that capture pivotal moments in each individual’s life. Every portrait reads like a short story unto itself, making this volume a good choice for harried teens, yet Gyasi imbues the work with a remarkably seamless feel. Through the combined historical perspectives of each descendant, the author reveals that racism is often rooted in tribalism, greed, and the lust for power. Many students will be surprised to discover that the enslavement of Africans was not just a white man’s crime. VERDICT: Well researched, beautifully told, and easy to read, this title is destined to become required, as well as enlightening, reading for teens.”—Cary Frostick, formerly at Mary Riley Styles Public Library, Falls Church, VA.

As always, anyone is welcome to the book club. We drink a little beer, laugh a few laughs, and talk about the book. And, for many, it is also a chance to catch up with friends old and new. If you want to sign up for our book club email list, please shoot us an email. See you in November. Cheers!