Cribbage for a Cause – This One is For You Steve White!

Every month, we hold a cribbage tournament here at Throwback Brewery. Cribbage is a super fun game, and we are quite lucky to have a very fun and nice set of folks that show up every month to play. When I am around and not committed to another event, I look forward to playing with everyone! For the cribbage tournament at the end of this month, we thought we would switch things up a bit and hold a tournament that rewards the winner with a cash prize, while also raising money for a local charity. We are calling it Cribbage For a Cause. Here are the pertinent details:

When: Wednesday, September 27th 6pm.
Where: Throwback Brewery
What: Singles cribbage tournament to benefit Southeast Land Trust of New Hampshire – with a cash prize for winning! ** See below for more information on how the tournament will be run.
Price: It is $10 to play. The winner of the tournament keeps 40% of the pot, while the remainder goes to Southeast Land Trust of New Hampshire. Invite your friends to play… the more people, the bigger the pot! On a normal cribbage tournament night, we get anywhere from 12 to 30 people. If there are as few as 12 people, the winner gets $48. If we get 30 people, then the winner goes home with $120 dollars. More people – more money to the winner!
Tickets: Get your tickets online now or when you come in to Throwback Brewery.

Note – for October we will resume the regular pairs cribbage tournament.

Now some of you might ask “Why Cribbage for a Cause”? A convergence of a few events led us to this tournament. The most important of which is that on August 27th, my friend Steve White passed away. Annette and I met Steve through the Rye Energy Committee back around 2008. Our friendship developed as every few weeks we would pick up some organic, heritage breed chickens at Steve and Mimi’s house (but that is a longer story :). Annette and I just clicked with Steve and Mimi. Perhaps it was because we were around the same age as their daughters, or because we shared the same values about trying to live a greener life, or maybe it is just because sometimes in life you are lucky enough to find people that you really feel comfortable around and enjoy spending time together. Either way, we felt quite fortunate to have Steve in our lives.

Steve was an avid card player  — in fact, some of you might have played against Steve and Jeff at one of our tournaments here. Steve was also a big lover of the outdoors. In Steve’s Obituary, his family requests that instead of flowers “people take action directly or through donation to combat climate change, the most urgent issue of our time for Steve. Charitable gifts may be sent to the Southeast Land Trust, Trout Unlimited, or an environmental organization of choice.”

Southeast Land Trust of New Hampshire’s mission is to protect and sustain the significant lands in our communities for clean water, outdoor recreation, fresh food, wildlife, and healthy forests.

So on Sept 27th, we hope you guys can join us to play a game that our friend Steve loved, while also supporting a cause that meant a lot to him and to us. We can’t think of a better way to celebrate our friend’s life than to bring good people together to play some cards and have some laughs – all for a good cause.

** Here is the fine print on how the tournament will be run.
— Names will be drawn from a hat to determine who is playing whom.
— Yes, we normally play cribbage here in teams, but this will be a singles tournament.
— We will play single elimination. If you lose a game, you are out of the tournament, but, you are more than welcome to hang out and play more cribbage games with other folks that have also been eliminated from the tournament.
— If you keep winning, you can expect to play around 4 or 5 games.
— The way a single elimination tournament works is that unless we get exact numbers like 16 players or 32 players, there will be some folks that need to play an extra game, or, said another way, some folks that skip right to round two. See below for an example. If 15 people sign up, then everyone but one person starts at the same time. The 15th player starts their game after the first round of games are finished. Since names will be randomly drawn, you could get lucky and miss the first round, or, you could have to play in the first round. Since this is for fun and for charity, we expect folks to understand this and accept the slot they will be randomly assigned. 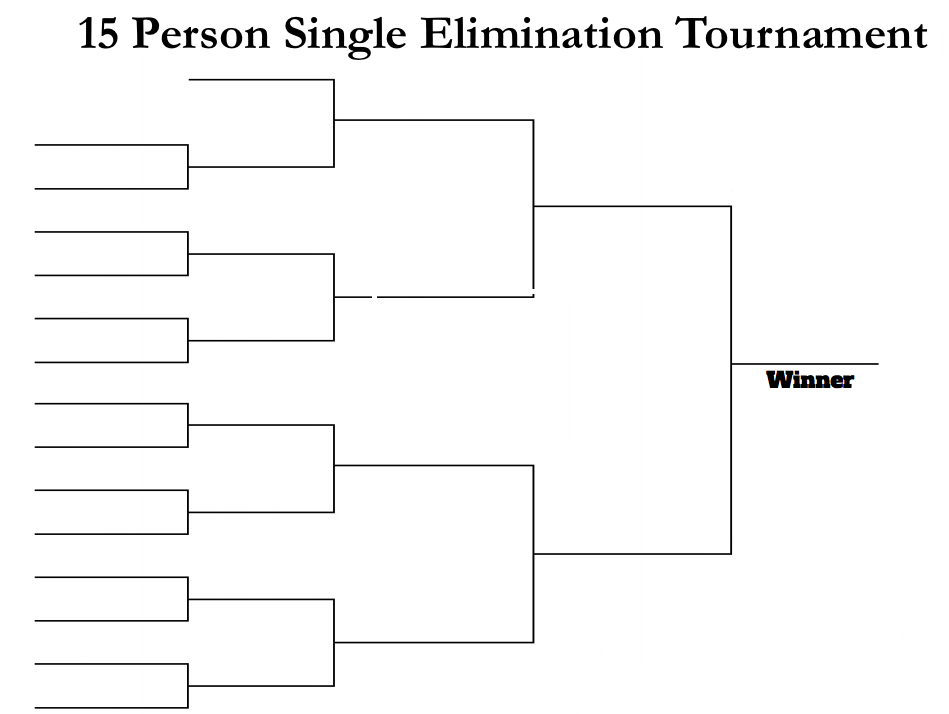