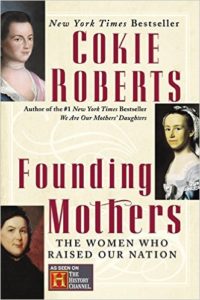 Our next Throwback Brewery book club meeting will be just after the holidays – on Sunday, January 3rd at 12 pm. The book is “Founding Mothers” by NPR’s Cokie Roberts. NOTE to regular book club members – we are meeting at 12pm, not our usual 1pm since the last Patriots game of the season is on at 1pm. For anyone interested, we can chat about the book for an hour and head over to the Brew House to watch the game! 🙂
Here is what Amazon has to say about Founding Mothers:
“From #1 New York Times bestselling author Cokie Roberts comes New York Times bestseller Founding Mothers, an intimate and illuminating look at the fervently patriotic and passionate women whose tireless pursuits on behalf of their families–and their country–proved just as crucial to the forging of a new nation as the rebellion that established it.
While much has been written about the men who signed the Declaration of Independence, battled the British, and framed the Constitution, the wives, mothers, sisters and daughters they left behind have been little noticed by history. #1 New York Times bestselling author Cokie Roberts brings us women who fought the Revolution as valiantly as the men, often defending their very doorsteps. Drawing upon personal correspondence, private journals, and even favoured recipes, Roberts reveals the often surprising stories of these fascinating women, bringing to life the everyday trials and extraordinary triumphs of individuals like Abigail Adams, Mercy Otis Warren, Deborah Read Franklin, Eliza Pinckney, Catherine Littlefield Green, Esther DeBerdt Reed and Martha Washington–proving that without our exemplary women, the new country might have never survived.”
Hope to see folks on January 3rd!
Please note – Anyone is welcome to the book club. We drink a little beer, laugh a few laughs, and talk about the book. And, for many, it is also a chance to catch up with friends old and new. Cheers!
Tweet
Share
Pin
Tweet
Share
Pin
Previous PostNext Post