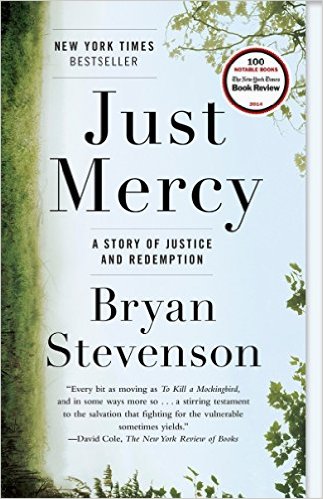 Our next Throwback Brewery book club meeting will be on Sunday, October 18th at 1pm. At the book club meeting, we decided to read How to Be Both by Ali Smith. However, since this book is coming out in paperback October 13th, and the hard cover seems to have been pulled from some shelves already (like Barnes & Noble), the plan is to read this for the November book club meeting instead. So advanced notice for those who want to get started now! 🙂
After polling a few book club regulars, the consensus was to read Just Mercy: A Story of Justice by Bryan Stevenson.
From Amazon.com: “New York Times Bestseller | Named one of the Best Books of the Year by The New York Times • The Washington Post • The Boston Globe • The Seattle Times • Esquire • Time
Winner of the Carnegie Medal for Nonfiction | Winner of the NAACP Image Award for Nonfiction | Winner of a Books for a Better Life Award | Finalist for the Los Angeles Book Prize | Finalist for the Kirkus Reviews Prize | An American Library Association Notable Book
A powerful true story about the potential for mercy to redeem us, and a clarion call to fix our broken system of justice—from one of the most brilliant and influential lawyers of our time

Bryan Stevenson was a young lawyer when he founded the Equal Justice Initiative, a legal practice dedicated to defending those most desperate and in need: the poor, the wrongly condemned, and women and children trapped in the farthest reaches of our criminal justice system. One of his first cases was that of Walter McMillian, a young man who was sentenced to die for a notorious murder he insisted he didn’t commit. The case drew Bryan into a tangle of conspiracy, political machination, and legal brinksmanship—and transformed his understanding of mercy and justice forever.
Just Mercy is at once an unforgettable account of an idealistic, gifted young lawyer’s coming of age, a moving window into the lives of those he has defended, and an inspiring argument for compassion in the pursuit of true justice.”
Hope to see folks on October 18th!
Please note – Anyone is welcome to the book club. We drink a little beer, laugh a few laughs, and talk about the book. And, for many, it is also a chance to catch up with friends old and new. Cheers!
Tweet
Share
Pin
Tweet
Share
Pin
Previous PostNext Post