Hello Summer Readers! Our next Throwback book club meeting will be on Sunday, July 23rd at 1pm. Since that date is a bit far out, we decided to do something different and read two books! For those of you that find that too ambitious, we will discuss the top vote getting book first, and then, anyone who wants to can stick around for a discussion on the second book. 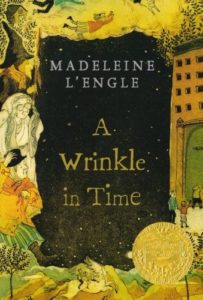 The first book we will be reading is A Wrinkle in Time by Madeleine L’Engle. Here’s what Amazon has to say about this classic winner of the 1963 Newbery Medal:

“It was a dark and stormy night; Meg Murry, her small brother Charles Wallace, and her mother had come down to the kitchen for a midnight snack when they were upset by the arrival of a most disturbing stranger.
“Wild nights are my glory,” the unearthly stranger told them. “I just got caught in a downdraft and blown off course. Let me sit down for a moment, and then I’ll be on my way. Speaking of ways, by the way, there is such a thing as a tesseract.”
A tesseract (in case the reader doesn’t know) is a wrinkle in time. To tell more would rob the reader of the enjoyment of Miss L’Engle’s unusual book. A Wrinkle in Time, winner of the Newbery Medal in 1963, is the story of the adventures in space and time of Meg, Charles Wallace, and Calvin O’Keefe (athlete, student, and one of the most popular boys in high school). They are in search of Meg’s father, a scientist who disappeared while engaged in secret work for the government on the tesseract problem.”

The second choice was The Handmaid’s Tale by Margaret Atwood. Amazon says: 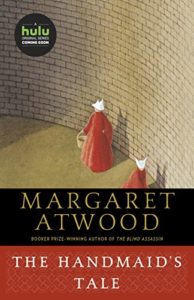 From the bestselling author of the MaddAddam trilogy, here is the #1 New York Times bestseller and seminal work of speculative fiction from the Booker Prize-winning author. Now a Hulu series starring Elizabeth Moss, Samira Wiley, and Joseph Fiennes.
“Offred is a Handmaid in the Republic of Gilead. She may leave the home of the Commander and his wife once a day to walk to food markets whose signs are now pictures instead of words because women are no longer allowed to read. She must lie on her back once a month and pray that the Commander makes her pregnant, because in an age of declining births, Offred and the other Handmaids are valued only if their ovaries are viable.
Offred can remember the days before, when she lived and made love with her husband Luke; when she played with and protected her daughter; when she had a job, money of her own, and access to knowledge. But all of that is gone now….
Funny, unexpected, horrifying, and altogether convincing, The Handmaid’s Tale is at once scathing satire, dire warning, and literary tour de force.”

So, read one, read both – and come hang with us! Anyone is welcome to the book club. We drink a little beer, laugh a few laughs, and talk about the book. And, for many, it is also a chance to catch up with friends old and new. If you want to sign up for our book club email list, please shoot us an email. Cheers!