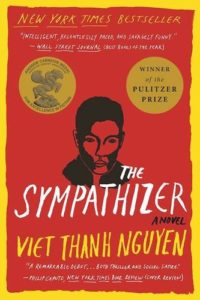 After you’ve recovered from all the holiday revelries, join us on Sunday, January 21st at 1pm for our first book club meeting of 2018! This month’s book choice will be  The Sympathizer by Viet Thanh Nguyen. Here’s what Amazon has to say about this book:

“The winner of the 2016 Pulitzer Prize for Fiction, as well as six other awards, The Sympathizer is the breakthrough novel of the year. With the pace and suspense of a thriller and prose that has been compared to Graham Greene and Saul Bellow, The Sympathizer is a sweeping epic of love and betrayal. The narrator, a communist double agent, is a “man of two minds,” a half-French, half-Vietnamese army captain who arranges to come to America after the Fall of Saigon, and while building a new life with other Vietnamese refugees in Los Angeles is secretly reporting back to his communist superiors in Vietnam. The Sympathizer is a blistering exploration of identity and America, a gripping espionage novel, and a powerful story of love and friendship.

An Amazon Best Book of April 2015: Viet Thanh Nguyen’s The Sympathizer brilliantly draws you in with the opening line: “I am a spy, a sleeper, a spook, a man of two faces.” It’s thrilling, rhythmic, and astonishing, as is the rest of Nguyen’s enthralling portrayal of the Vietnam War. The narrator is an undercover communist agent posing as a captain in the Southern Vietnamese Army. Set during the fall of Saigon and the years after in America, the captain spies on the general and the men he escaped with, sharing his information with his communist blood brothers in coded letters. But when his allegiance is called into question, he must act in a way that will haunt him forever. Political, historical, romantic and comic, The Sympathizer is a rich and hugely gratifying story that captures the complexity of the war and what it means to be of two minds. –Al Woodworth”

As always, anyone is welcome to the book club. We drink a little beer, laugh a few laughs, and talk about the book. And, for many, it is also a chance to catch up with friends old and new. If you want to sign up for our book club email list, please shoot us an email. See you in January. Cheers!