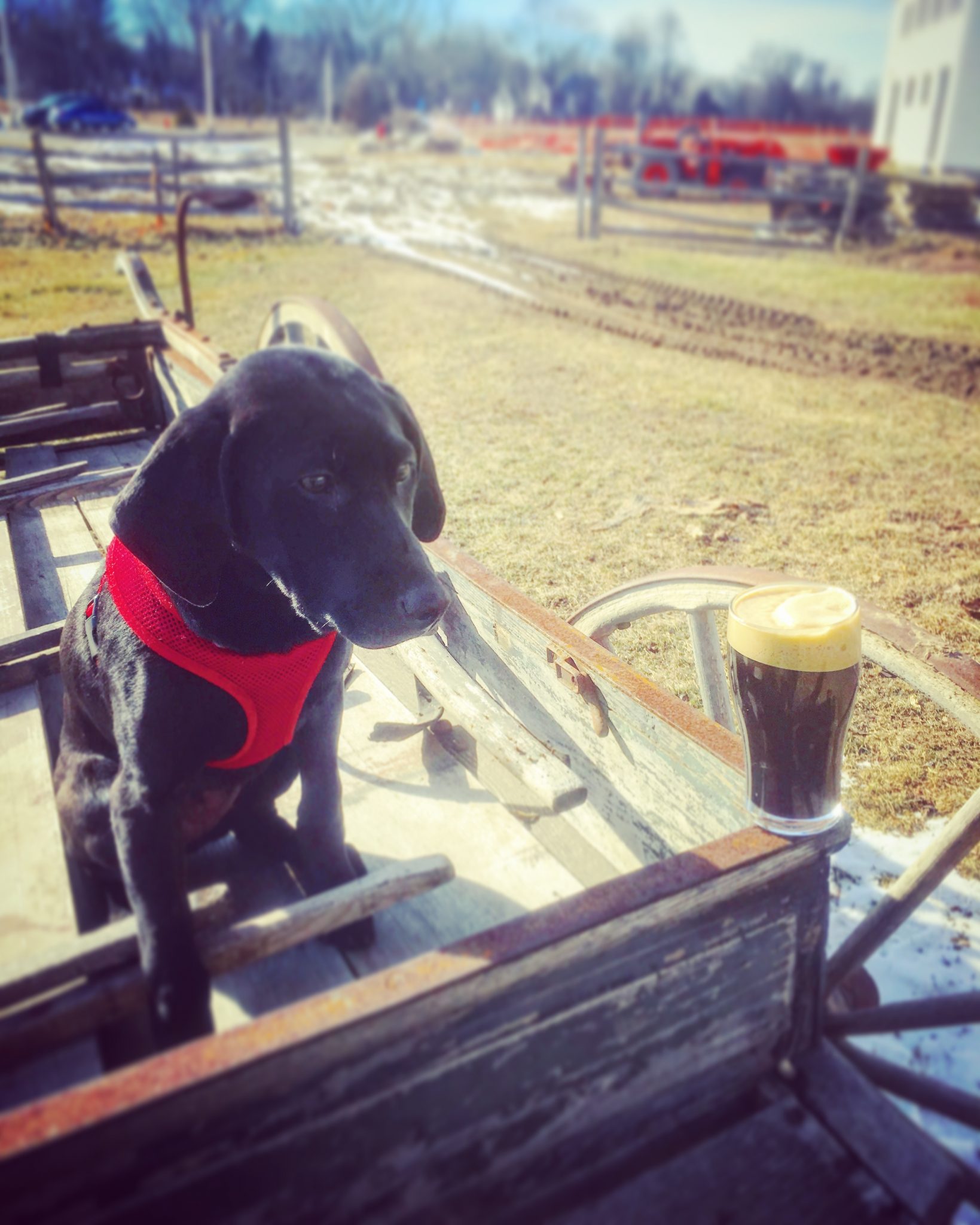 Raelynn keeping watch over a Vanilla Irish Stout at the Farm

I remember it like it was yesterday, but it was just about two years ago. It was 8 o’clock in the morning, and Head Brewer Annette placed on my desk a full pint of a brand new beer (Vanilla Irish Stout) so that I could give it a try and write down tasting notes to share with our Unafraid of the Dark IV customers. Normally, if I get a beer early in the morning, I drink just enough to get some good notes and then leave the rest. Usually this means that my desk is littered with half full glasses of beer until I get motivated to clean my desk! Ah, but not on this day and with this beer – I drank the whole darn thing!

Fast forward two years, and I am giddy to announce that Vanilla Irish Stout is back as a fan favorite for Unafraid of the Dark VI! I am even more giddy to announce that it is as good as I remember it – perhaps even better?- smooth, roasty, chocolatey, and dry with a smile-inducing vanilla aroma reminiscent of a freshly baked vanilla waffle cone. The vanilla beans used in this beer came from our friends at Flag Hill Distillery in Lee, NH. The beans were previously used to flavor one of their rums. Some of you might pick up a slight bit of oakiness in the beer, which I would contribute to the residual rum flavors in the beans.

Excited to learn more? Here you go:
– Appearance: Black in appearance with a creamy, light tan head.
– Aroma: This beer has a prominent vanilla nose with roasty, coffee-like undertones. Our Lead Server Kelly said it reminded her of a freshly baked waffle cone. It does!
– Taste & Mouthfeel: True to style for Irish Stouts, this beer is roasty, dry, creamy, and remarkably smooth. It is a lighter-bodied stout, but, compared to our beers in general, this is more of a medium-bodied beer. The added vanilla softens the roastiness. Don’t get me wrong, you can definitely taste the roasty – but it is very smooth, with just the right amount of bitter at the end. As mentioned above, you might be able to detect a touch of the rum, or maybe a bit of oakiness. You’ll also get dark / bittersweet chocolate notes.
– Pairing: If you have this beer while here at the brewery, we recommend pairing it with our Throwback Burger, Shepherd’s Pie, or Short Ribs. This would also pair nicely with Oysters, Irish cheddar cheese, stews, and dark chocolate.
– Serving Glass: At the brewery we will be serving this beer in a 16-oz pub glass – the closest thing we have to a nonic pint glass, which is the traditional serving vessel.
– Stats: Classic Irish Stouts have the lowest alcohol of the many stout variations, and ours is no exception, coming in at ABV is 4.8%.  Also, like most Irish Stouts, this beer is generously hopped (at 38 IBU), but there is really no discernible hop aroma or flavor.

Vanilla Irish Stout will be available starting Wednesday, February 8th (4pm). Also, as a special treat, on Friday, February 10th, during our open hours (11am-9pm), we’ll be serving up this beer in three different ways: On Cask, on Draft, and on Nitro! Our brewers have done something really special with the cask offering this time – soaking oak spirals in Jameson (yum!) and then carbonating it with blackstrap molasses. You can try a 4 oz pour of each of these beers at a discounted price of $5 that day. So come on by and see how different one beer can taste when poured three different ways! Let us know you are coming on our Facebook event page!

Finally, don’t forget ‘Fromage Friday’ – for the next two Friday’s we’ll be offering a slate with a specially selected cheese that pairs well the Vanilla Irish Stout. That’s ~2 oz of an artisanal New England cheese, an 8 oz beer, house pickle, house mustard, and crostini for just $12! Makes for a great lunch or a nice shared appetizer. Hope to see you at the farm!